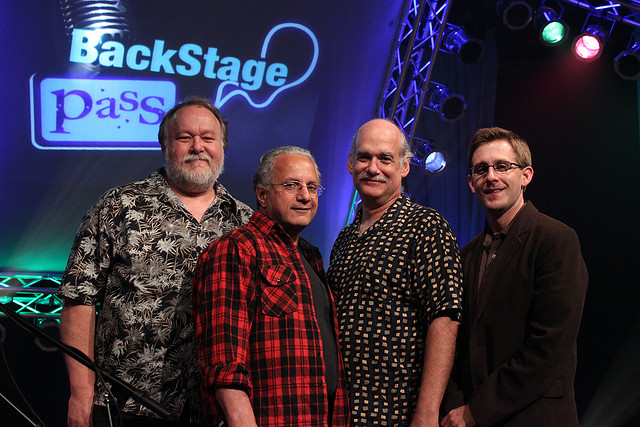 The String Doctors is a new group with a few very familiar faces.

Joel Mabus leads the group in so many ways. His superb songwriting and savvy stage presence bring unexpected banter and newborn songs to centerstage. And the Doctors’ rhythms bring out the guitar and mandolin abilities of this great virtuoso.

Ray Kamalay is the crooner and jokester. His “city mouse” lets the boys stretch on old swing material, both sweet and hot. His sparkling guitar lends both hot solos and luscious chords. As such, they’ve ranged to Canada and Europe to play some of the most prestigious festivals, including Edinburgh, Vancouver and the Philadelphia Folk Festival. Of that last appearance the Village Voice said,

“…And I thought I’d gone to Heaven when Ray Kamalay and Joel Mabus,
… rode high, hard and handsome duelling their swing guitars.”

Now they are joined by two talented fellows who have gathered kudos of their own.

Peter Knupfer, on fiddle, has been a popular freelance and session fiddler wherever he has lived. In the past he worked extensively with Grass Food and Lodging and Beats Workin’ with Don Stiernberg. He has won fiddle championships in Wisconsin (1976) and Kansas (1995) and recorded 8 folk and bluegrass album projects, appearing onstage with Byron Berline, Tony Trischka, Tim O’Brien, Peter Ostroushko and Howard Levy. His swinging, bluesy fiddle style will have you leavin’ your seat and tappin’ your feet.

Dave Rosin brings up the bottom on bass. A long-time associate of Ray’s, Dave is an accomplished jazz bassist and teacher of all stringed instruments. His luscious low tones frame this music with beauty and grace.

Together these four are The String Doctors, who bring a new kind of country swing to your lives, for your dancing and listening pleasure. And their “Michigan” humor will kill you.